What Is The Difference Between A Sweetpotato And A Yam?

What’s in a name? When it comes to the yam, a bit of confusion. The truth is what you’ve been calling a yam is most likely a sweet potato. Even more, it’s possible that you’ve never even tasted a yam!

That sweet, orange-colored root vegetable that you love so dearly is actually a sweet potato. Yes, all so-called “yams” are in fact sweet potatoes. Most people think that long, red-skinned sweet potatoes are yams, but they really are just one of many varieties of sweet potatoes. So where did all of the confusion come from? Let’s break down the main differences between yams and sweet potatoes! 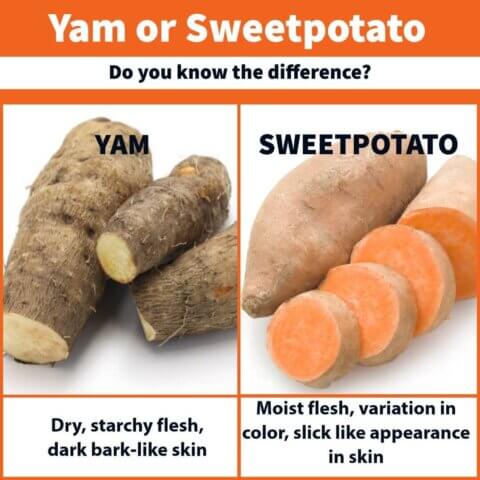 A true yam is a starchy edible root of the Dioscorea genus, and is generally imported to America from the Caribbean. It is rough and scaly and very low in beta carotene.

Depending on the variety, sweet potato flesh can vary from white to orange and even purple. The orange-fleshed variety was introduced to the United States several decades ago. In order to distinguish it from the white variety everyone was accustomed to, producers and shippers chose the English form of the African word “nyami” and labeled them “yams.”

Today the U.S. Department of Agriculture requires labels with the term ‘yam’ to be accompanied by the term ‘sweet potato.’ Despite the label regulations, most people still think of sweet potatoes as yams regardless of their true identity.

Think you know the differences between yams and sweetpotatoes?

In the U.S. the majority of Sweet potatoes sold are one of four appearances;

All are more slender in appearance than a potato and have tapered ends; however each of these does have a different flavor profile.

Varies considerably. Some yams are the size and shape of small potatoes; others can grow up to 1.5m (5ft) in length and weigh over 100lbs (70kg). Skins may be dark brown or light pink; insides white, yellow, purple, or pink.

In the U.S., over 50% of the country’s sweet potatoes are grown in North Carolina.

Today, yams are grown around the world, but West Africa is still where most yam crops — nearly 95% — are grown.