Ducks as the Future for Rice Farm

If nature’s way is the best, then we’ll see how practical it is.

I recently read an article referring to “ducks as the future for rice farm” and this statement made my research more intense, studying how ducks have been used to control weeds and insects in the cultivation of rice.

Research shows that this technique was first discovered in Japan by a farm owner named “Takao Furuno” 61, who grows rice and wheat without chemicals. He discovered an ancient rice-growing practice involving the use of ducks, and how they feed on insects and weeds without touching the plants. Their wading oxygenates the water and stirs up the soil while their droppings are also natural fertilizer which helps the rice grow faster.

Ducks are released in the rice paddies about ten days after planting the rice seedlings. Fifteen to twenty ducks will be assigned to ten acres of paddy, where they will feed on all the plant growth but rice. The stalks of rice plants are harder than those, so the ducks don’t want to eat them. In order to prevent the ducks from flying away and to protect them from attacks by stray dogs and weasels, the fields must be covered by nets.

This technique has also been tried out by Over 10,000 Japanese farmers have purchased the “Power of Duck” and in 2011 the technique was successful tried out in Southern France and other countries like china, thailand, south korean and iran. 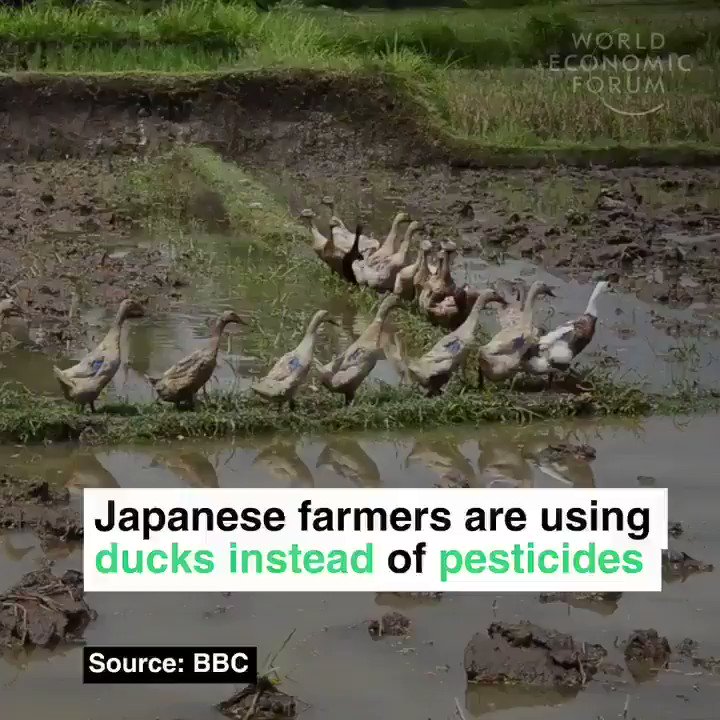 Do you know that Japanese farmers are using ducks instead of pesticides to control weeds in their rice farms? Watch this video to learn how they make this happen and head on to read an article we just published in the community here https://t.co/goVtN2PmJa Source: BBC https://t.co/3LxL7JMwpP

He also stated the only challenge he faces while using this method is that ducks get so fat after feeding on the weeds and insects that they start crushing the rice plants” and he advises farmers to always replace them (ducks) as they grow bigger.

The trend in rice cultivation in Japan, provides a livelihood for 1.4 million families, is, however, towards larger rice farms and more intensive production.

Great article…Thanks for this information.