It used to be used as money 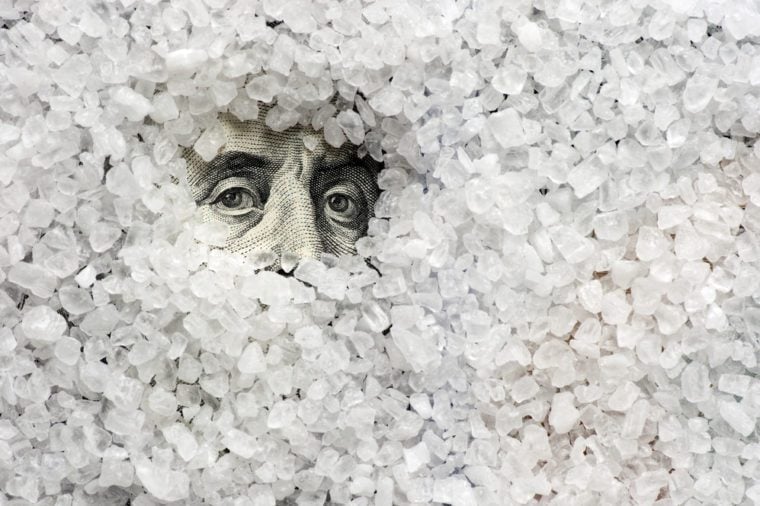 Salt was so valuable in ancient Rome that soldiers were sometimes paid with it. In fact, the word “salary” comes from the Latin word sal , for salt. When a soldier was doing a lousy job, his paycheck might be cut, which is how we got the expression “not worth his salt.”

Salt can still be valuable today 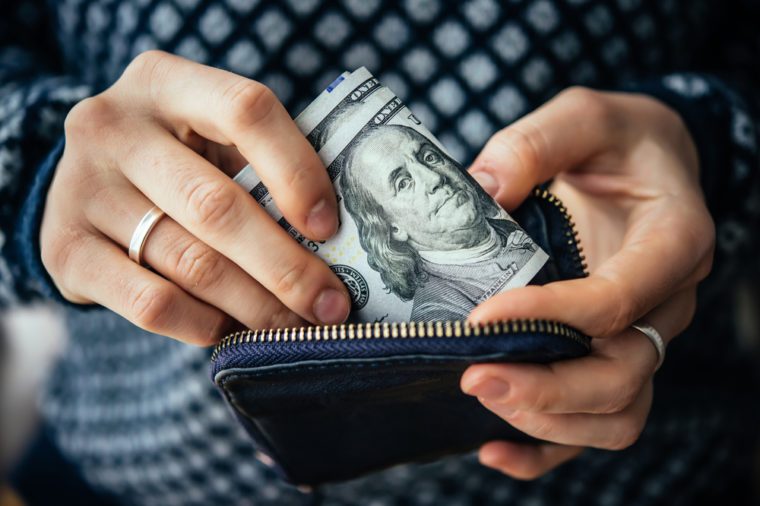 Amethyst Bamboo 9x salt, which rings up at $398 a pound, may be the most expensive in the world. This pricey stuff takes a lot of time to produce—it’s roasted nine times inside a bamboo pole at temperatures exceeding 1,400 degrees Fahrenheit. One store says the resulting delicacy “smells like something dragons use to season their victims before eating them.”

It was a big import 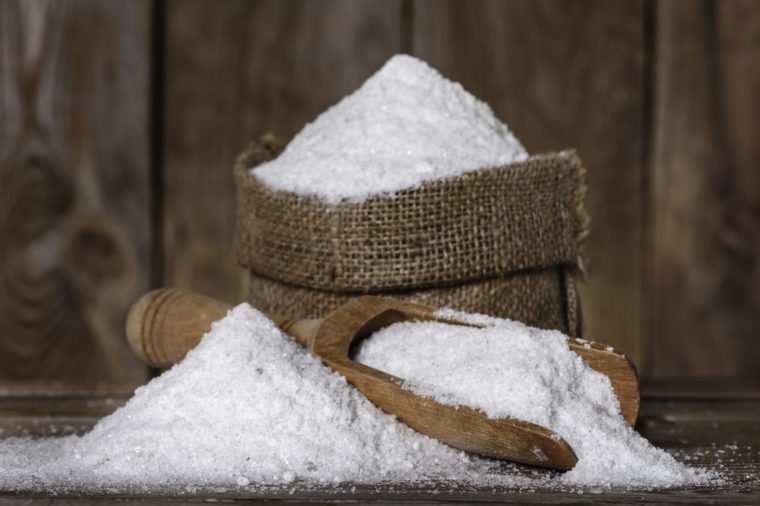 Historically, salt’s value came from its ability to preserve food. Venice, Italy may be famous for its canals now, but salt imports fueled its rise as an influential trade power by the end of the 13th century.

Salt also took on a great deal of symbolic value 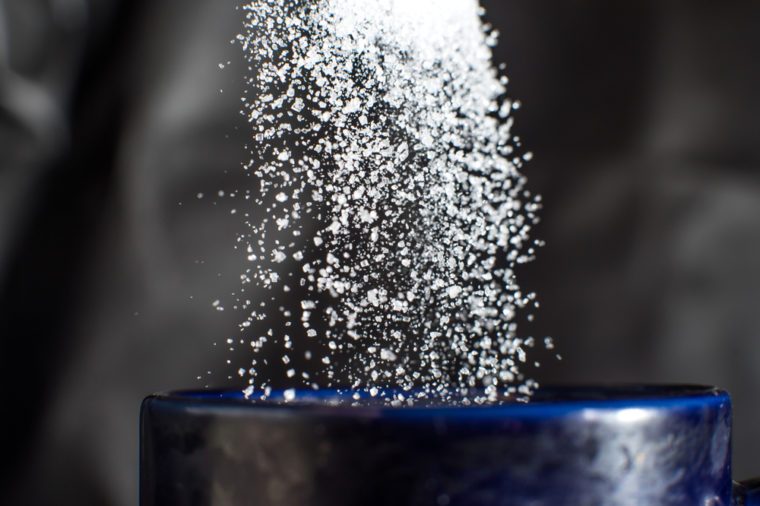 There’s a reason it is mentioned so many times in the Bible (“salt of the earth,” “a pillar of salt,” “a covenant of salt”). Its preservative properties made it an apt metaphor for permanence and conviction.

Cutting it out isn’t easy 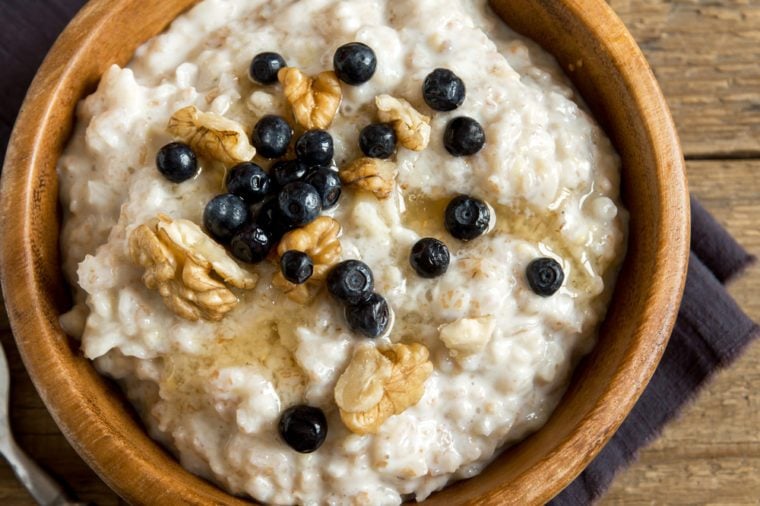 Most people know about the health risks associated with sodium, but reducing your intake isn’t always easy. Here are some facts about salt to put things in perspective. More than 75 percent of the sodium Americans eat comes from processed foods; bread, cured meats, and canned soup top the list. Even foods that don’t taste salty may contain it. Instant oatmeal with maple and brown sugar, for instance, contains 170 milligrams of ­sodium per ounce—a little more than a small bag of potato chips. 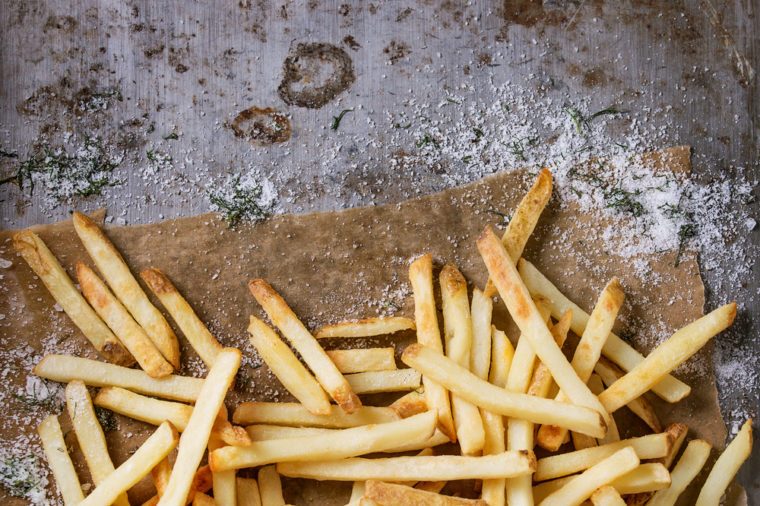 How’s this for unexpected facts about salt? A 2012 study that examined sodium levels of fast-food menu items from different countries found that pizza and burgers contained more sodium than French fries, because they come in larger serving sizes.

Extra salt might be lurking in your meat, even if you cook at home and are very careful 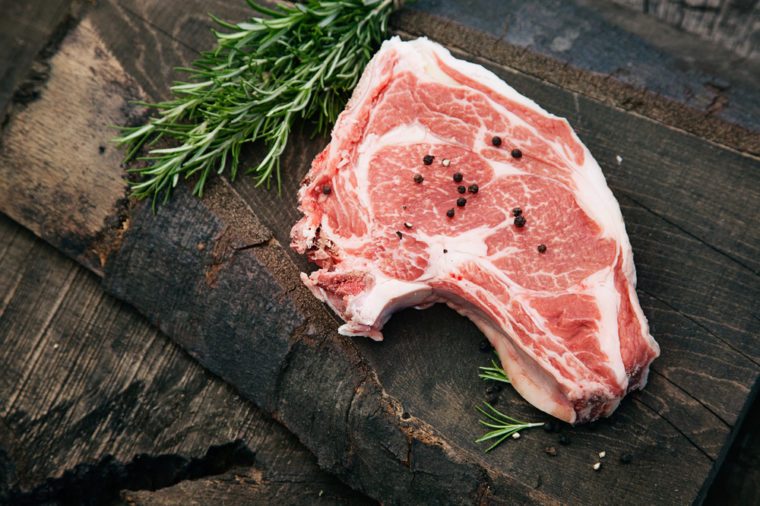 According to the USDA, about 60 percent of all raw meat and poultry products are injected with or soaked in a salty ­solution. The words “enhanced,” “marinated,” “basted,” or “improved” on the packaging can signal the presence of salt. To avoid it, opt for label wording such as “contains up to 4 percent retained ­water,” says Christy Brissette, RDN, president of [80 Twenty Nutrition]. Here are some more [surprising food facts that might just change the way you eat] 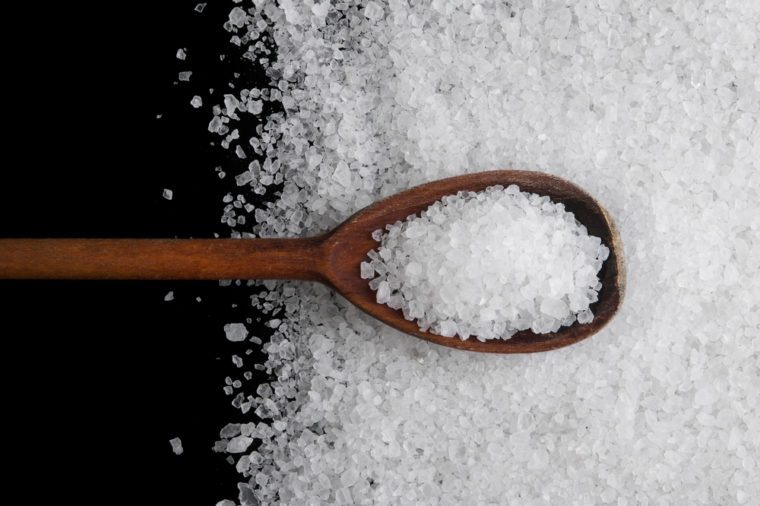 Sea salt may sound healthier than table salt, but most sea salts contain roughly the same proportion of sodium—about 40 percent—as table salt. If you are looking for sodium-free flavoring, try garlic, pepper, oregano, sage, rosemary, and other spices or herbs.

Always try to reduce your intake 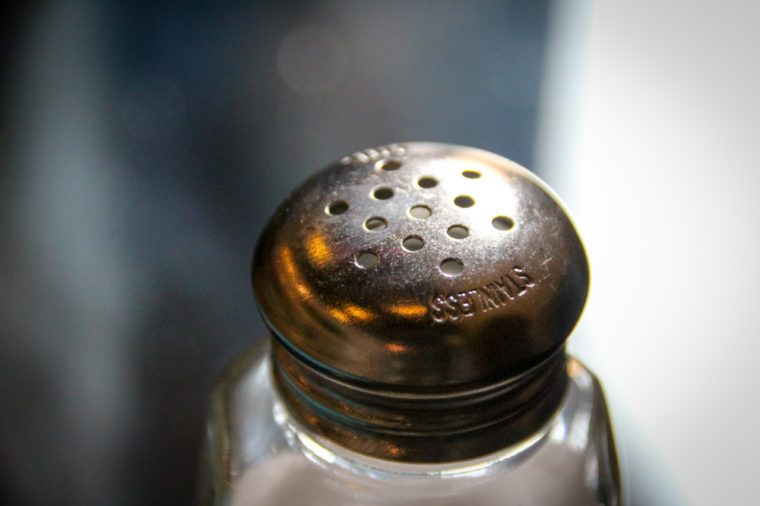 Even if you don’t have hyper­tension, it’s still a good idea to cut down on your salt intake to reduce your blood pressure, according to a 2017 ­review of 185 studies.

It can cause headaches 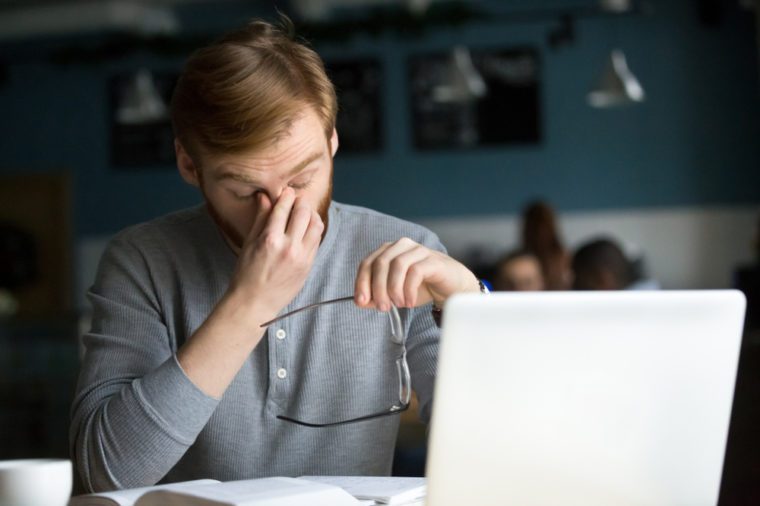 For older folks especially, a heavy hand with the salt shaker may also hurt your head. A study of 975 people ages 60 to 80 with hyper­tension found that reducing sodium in their diets was associated with lower risk of headache. Be on the lookout for these other signs you’re eating too much sodium, too.

Still, we all need at least some salt 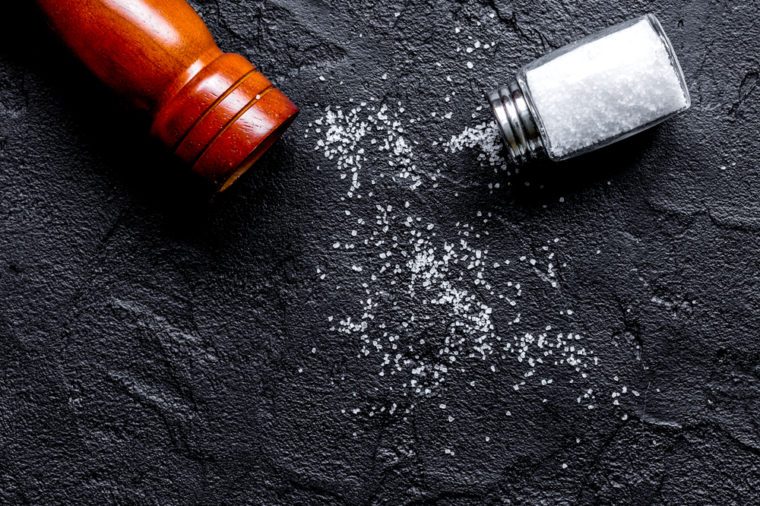 It facilitates the transport of nutrients and oxygen, allows nerves to transmit messages, and helps our muscles work. The average adult’s body contains about 250 grams of ­sodium—the equivalent of about three or four shakers of salt. 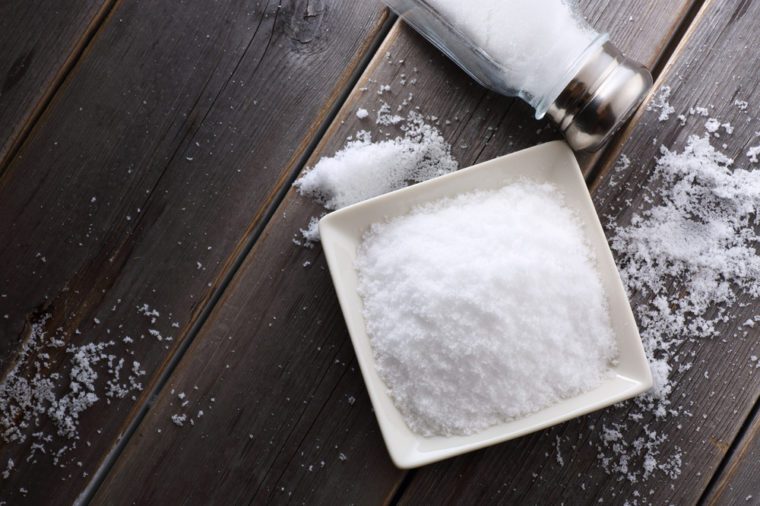 In the 1920s, salt became a primary tool in the fight against goiter, a thyroid disorder caused by iodine ­deficiency. Iodized salt became common in American kitchens, and cases of goiter nearly disappeared. Today, only about 53 percent of table salt sold through retail is iodized. 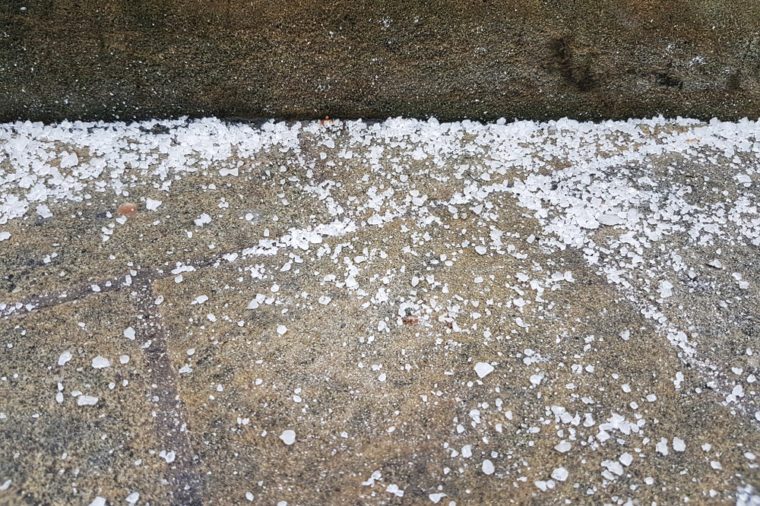 After all those facts about salt in food, you might be surprised to know that the number one use of salt in the United States isn’t on food at all.